Final Time in the Valley workshop 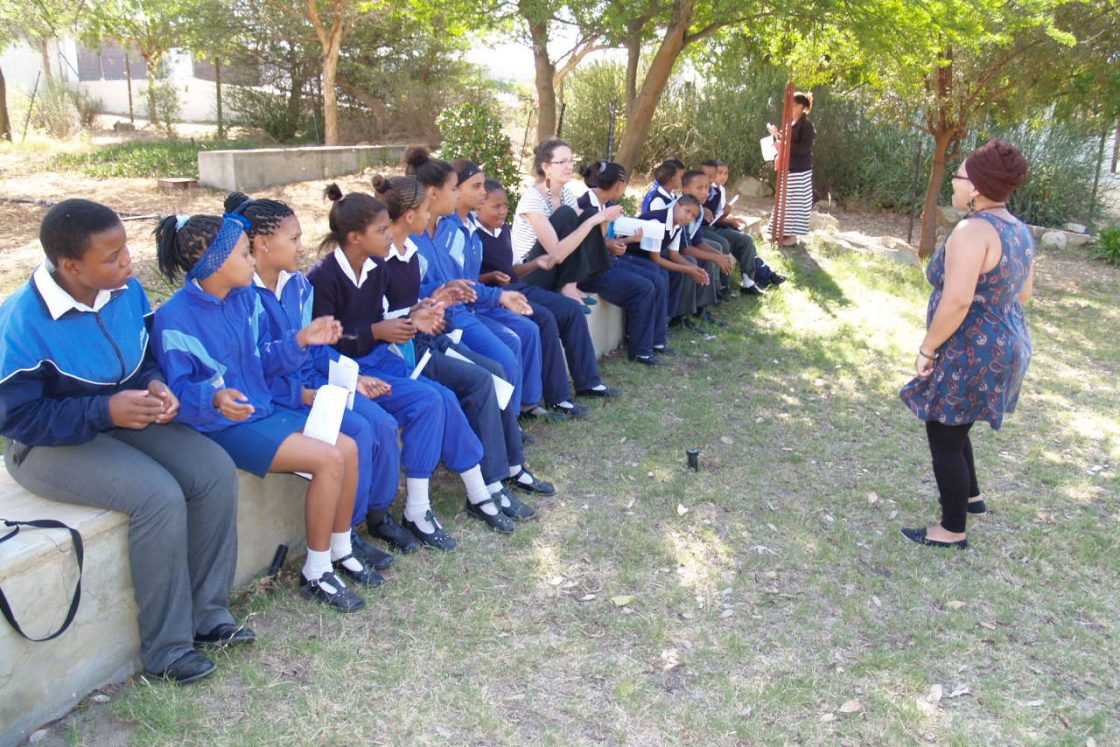 Over the past eight months – and with a run up for six months before that, CBN has been working with the children of the Cederberg on a series of workshops considering the million-year heritage of the valley of the Olifants River. This series of ten workshops (some of them four days in duration) was part of a larger Clanwilliam Dam Community Project, with PGS Heritage and Clanwilliam Living Landscape Project, and was funded by the Department of Water and Sanitation.

It has been a fascinating journey. Our team included musicians, archaeologists, (several of them), historians, storytellers, writers, artists, song-writers, botanists, violinists, poets, artists, craftspeople and writers.

The Clanwilliam dam will be raised in the near future and, as part of the advance planning, sites of cultural importance as well as the plants and stories of the valley are being recorded before they are affected by rising water levels. Our brief was to conduct a series of educational and motivational workshops with young people in the Cederberg area. We worked with learners from Clanwilliam High School, Sederberg Primary School, Augsburg primary and secondary schools and Elizabethfontein Primary School. We also enjoyed massive support from Clanwilliam Library, whose librarians entered into the whole spirit of this huge project.

Our theme, as always, was reading, but this time with a greater focus on non-fiction, which proved to be an extremely popular way of intruding the concept of books being fun. We worked extensively with donated books in the Cambridge Rainbow Readers scheme where there are both stories and information books on specific topics – Archaeology being one of them.

As a suitable finale to this truly exciting project, we held a small workshop as part of the Heritage Symposium that took place in Clanwilliam on 15,16 & 17 October. We enlisted the support of Blaq Pearl. Well known singer-song-writer and poet who has worked with us before. The text we chose was one we have been working on at many of the workshops – The Song of the Elephant River. (In English, to accommodate the many overseas delegates to the conference.)

Sixteen children were allowed out of school an hour early to come to Clanwilliam Living Landscape Project where they met with facilitator Blaq Pearl and CBN team Lesley Beake and Rosemary Bangham. We began by reviewing the workshops and then focused on the theme of the river, beginning high up in the mountains as rain and then tumbling down into the valley until it comes to a STOP at the wall of the Clanwilliam Dam and is tamed into irrigation for the fertile valley below.

We performed the song-poem for the delegates at the large rock gongs brought to Living Landscape earlier this year. We were extremely proud of the children we have come to speak of as ‘our children’. They delivered their piece with great dignity and clarity. (One of the observers remarked that they should all become television presenters, which pleased them greatly.) We had hoped to do more. Some children were prepared to speak about what the project has meant to them and answer questions. Time pressures made this impossible – but we did what we came to do.

One child asked had a question: ‘Why did you bring CBN to Clanwilliam?’ (Children’s Book Network had been working with this age group for eighteen months prior to the Clanwilliam Dam Community Project.)

‘What do you think?’ I asked her.
‘To make the children happy,’ was the answer.

We hope (we know) we did more than that in the line of reading activity, self-confidence, inspiration and the sharing of knowledge about their heritage and how important it is. If we made them happy too … well, that makes us happy also!