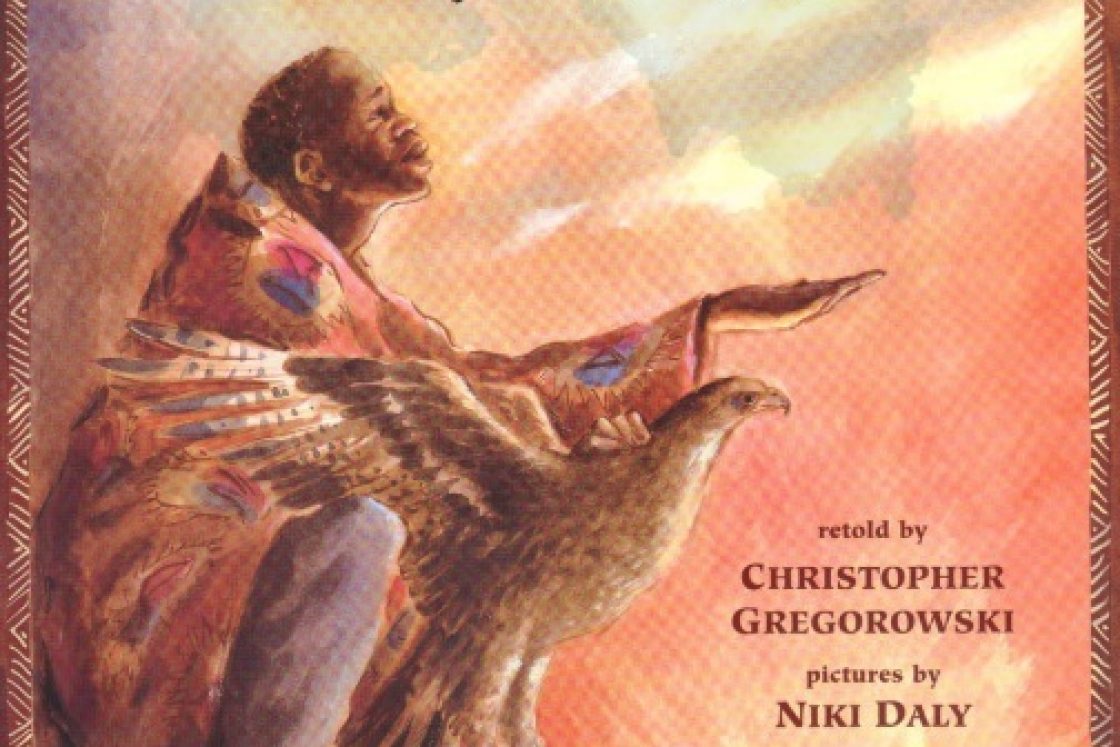 The story of the book Fly, Eagle, Fly!
presented by Jay Heale

Fly, Eagle, Fly! has become the most famous picture-book story in South African children’s literature. It has a past, a present, and probably a long future.

PAST
The basic story was used as a parable by the Ghanaian preacher James Aggrey, who was born in 1875. It told how an African farmer found an abandoned eagle chick and took it back to his homestead. Growing up among the chickens, the young eagle imagined that it was a chicken. Until a friend of the farmer spotted the now grown eagle and tried to persuade the bird to fly. Twice he failed. The third time he persuaded the farmer to carry the bird to the top of a mountain during the dark. When dawn came into the sky, the eagle spread its great wings, launched itself forward, and flew … “lost to sight in the brightness of the rising sun, never again to live among the chickens.”

In 1981, Christopher Gregorowski retold this story to his small daughter, who was dying. He gave the parable an Eastern Cape setting, aiming to show that “we are all born to be eagles who are lifted up by the might of the Spirit.” Fly, Eagle, Fly! was published by Tafelberg, using illustrations by Niki Daly. Colour printing was then too expensive, so he used only black and a warm yellow-ochre. The book was warmly received, praised by reviewers, turned into an animated film by Weston Woods in the United States (using the storytelling voice of Gcina Mhlophe), and began to become quietly well-known.

PRESENT
In the year 2000, Tafelberg produced a new edition, with larger, full-colour pictures re-created by Niki Daly, with a special Foreword from Archbishop Desmond Tutu. With the support of Biblionef, Fly, Eagle, Fly! was translated and published in all eleven official languages of South Africa. At last, all our children could hear this inspiring story in their own mother-tongue.

During a visit to Japan, I had the honour to be asked to tell a story in the presence of Her Majesty Empress Michiko (who loves children and their books). So I chose to tell the story of Fly, Eagle, Fly! An interpreter helped me explain the main content of the story, but I read the last page aloud in English. While Her Majesty nodded in approval that we should “never again live among the chickens”, I gave her my copy of the book to add to her library.

Since then, Fly, Eagle, Fly! has been named constantly in every list of the best children’s books of South Africa. So it was no surprise that Lesley Beake chose it as a highly suitable book (for the CBN) to accompany the landing of Johan Wiklund, who had flown all the way from Scandinavia in his 1935 De Havilland 60 Moth biplane. (His plane is far older than the book!)

FUTURE
It is certainly a story about flight – and about rising above our everyday problems. The donated copies of Fly, Eagle, Fly! are sure to arouse a new interest in Sweden. I am only one of many people who continue to praise this book for its writing, its illustrations and for its uplifting message. You, who are reading these words, can share this story with your children and your grandchildren – wherever they live in South Africa and whatever language they speak.
May all our children grow up to fly like eagles!

We also found this lovely video animating the story which we showed the children in a quiet moment at the aforementioned workshop before the plane landed.

With thanks to Up2Us and Shikaya for letting us share their video.