First day of Time and the Valley for Primary School 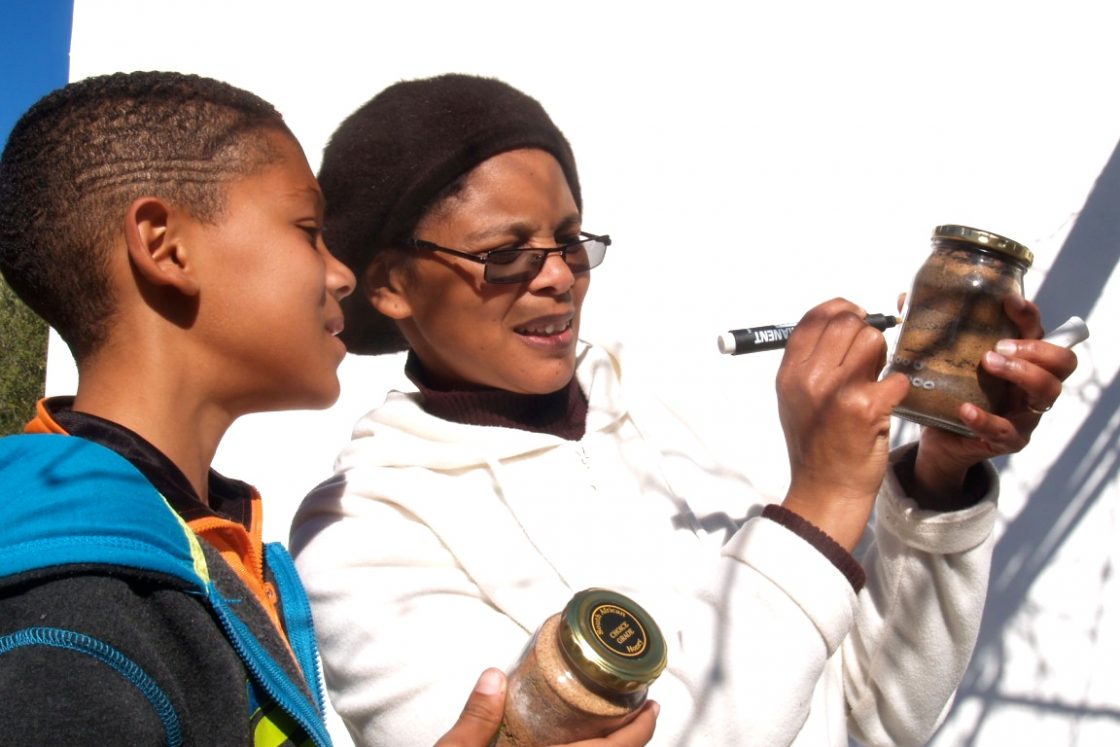 Today was the first day of a four-day workshop for younger children on the theme of archaeology and the Olifants River Valley.

We began with the delightful stories of Christopher Houghton – which had nothing to do with archaeology at all, but which meant we could sit and laugh in the sun on a freezing cold morning with hot chocolate and muffins. Books are fun as well as instructive!

We followed that with a sesion with archaeologist Emily Hallinan – a fascinating and very visual time line demonstration spanning most of the garden and yard and illustrating more aptly than anything in a diagram exactly how long people have been living in the valley. The edge of the guesthouse garden was a million years ago and the wall of the ablution block the present, with dated artefacts along the way. The children had a chance to handle and really get the sense of stone tools and see how they refined over time.

Still outside, the participants each created archaeology in a jar and gained an understanding of how archaeologists work and how meticulously they excavate the signs of the past. The resulting jars gave an idea of how strata build up and how tools and other objects are covered – and can be uncovered again.

It was warm enough to go indoors, out of the sun, to look at why archaeologists are working around the Clanwilliam Dam at this particular time and to have a look at how rivers form and how dams work.

We then had examined the Archaeology book box (part of the Cambridge University Rainbow Readers series) while we talked about the realities of being a hunter-gatherer (as opposed to the romanticised idea) and read the chilling account of a hunt gone wrong in Wolf Brother by, Michael Paver.

Then there was a quiet time for everybody to get to grips with some serious archaeological reading.

After the usual hearty lunch, we had Books and Stories again, coming closer to the present life of hunter-gatherers and examining the way that stories actually become books. (Waiting for Rain by Megan Biesele and Lesley Beake.)

The afternoon was devoted to making more panels for the Clanwilliam quilt begun with the high school participants two weeks ago and a vigorous game of ‘fruit salad’ in the garden to recover from the artistic endeavour. We finished up with quiet writing and reading time. One group recalled stories their elders have told them and the other group wrote about stories they would like to tell their own grandchildren one day.

Eighteen children attended the workshop and a very good time was had by all, although some of the facilitators had to lie down for a bit immediately afterwards!

Thanks:
Thanks: This workshop was part of the Clanwilliam Dam Community Project (CDCP) in association with Clanwilliam Living Landscape Project, PGS Heritage and Clanwilliam Municipality, particularly their Library and their librarians who give CBN wonderful support. Sponsorship for the workshops comes from the Department of Water and Sanitation as part of its Social responsibility programme associated with the raising of the Clanwilliam Dam wall.

Special thanks for local input:
Clanwilliam Superspar gave us a generous discount on groceries for feeding the children (a total of 75 meals were provided) as well as snack breakfasts and cash donations from Heather and Donald McAllister and an anonymous donor, which were greatly appreciated. Thank you all for being part of the project.