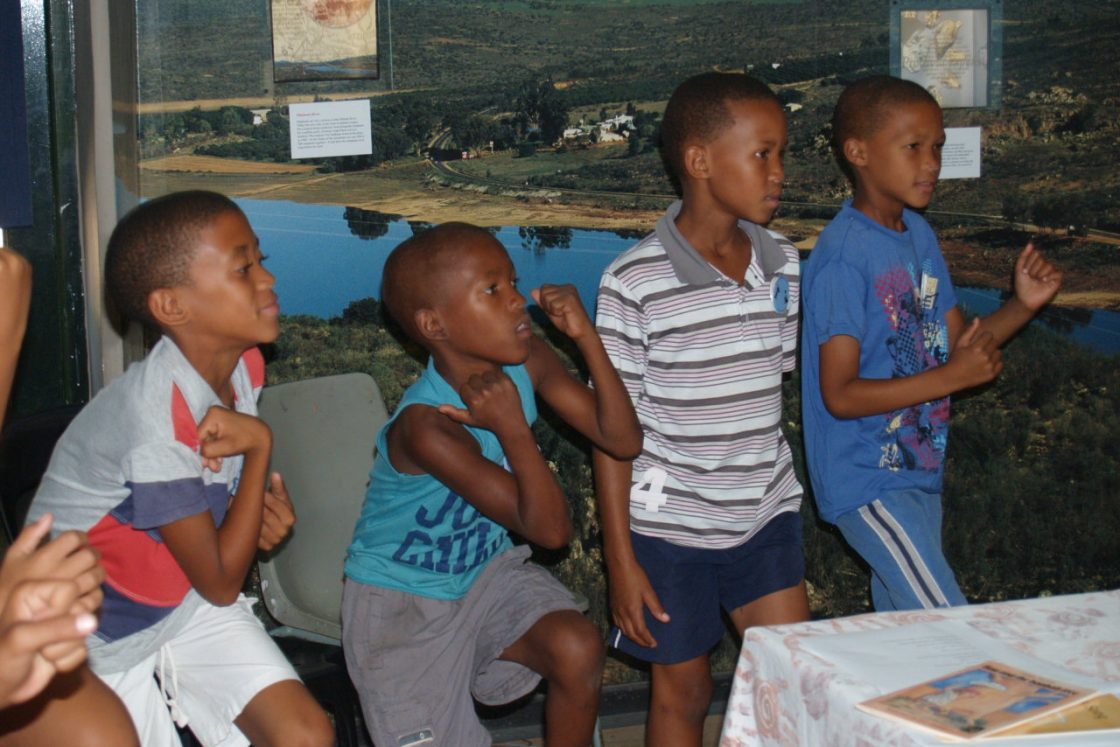 Between 8 and 10 April, twenty-three children aged from 9-11 years old attended the most exciting workshop yet! A team of experienced facilitators worked hard to develop the materials, most of which will be included in one or other of our toolboxes.

There were children everywhere, drawn together in the hall for regular joint sessions and then dividing into two groups for activities. In a short three days, they managed to achieve:

• Books on a San theme: Bau and the baobab. Waiting for Rain, The Old Way
• Books: other themes: The Django, Every Voice Counts (Children’s Writing)
• Archaeology: Stratigraphy and how layers of land are laid down and changed, and excavating carefully to record time as well as space – Land and Time
• Choral verse: Song of the Elephant River and I am going on a lion hunt (I’m not scared!) crocE Moses also performed his water poem
• Artwork: Fluid designs using enamel paint floating on water to make river patterns
• Paper weaving with maps and pictures to create landscape layers and stratigraphy
• River Words: (Also mountains and sky) using Rotary donated dictionaries
• Language: Stories without words (Morph and Chas animation)
• Music: Creating sounds with found objects and working with the rock gongs and the choral verse.
• Quiet reading: From Cambridge Rainbow Readers Series, Archaeology and People boxes

The theme was – as all our workshops will be in Clanwilliam this year – around the Olifants River and the raising of the Clanwilliam Dam. Associated rising water levels will mean an archaeological rescue of rock art and Stone Age artefacts. This begins next week and CBN is already deep in preparation for work we will do with the archaeologists and children.

Our facilitators multi-tasked across a wide range of disciplines and included CrocE Moses (wordsmith and poet), Rosemary Bangham (who doubles up as CBN’s admin manager) who was involved with everything, but especially art, craft and the production of choral verse. Lesley Beake facillitated generally and handled the books and stories – some of which were specially created for these workshops.

Emily Hallinan, an archaeologist who has been working for some years in the area around Clanwilliam, gave some truly excellent short demonstrations of how the geology of the Cederberg and the river was formed and an introduction to ‘archaeology in a jar’ where the children formed layers of different materials and worked out what layer (and the objects in it) was oldest. We really missed violinist Anele Mhlahlo who had a last minute work commitment in Cape Town – but we have a lot for him to do next time!

The themes were constantly intertwined, pulled together by books and stories, as always. Children had a chance to learn new things, remember things they already knew, perform, sing, draw, create river patterns and river word-pictures. They also heard stories and used books related to San people who once lived in this valley, and had opportunities in quiet moments to catch up with reading from the growing collection of books in the CBN classroom. The classroom has benefitted hugely from the addition of two large notice boards (funded by Clanwilliam Dam Community Project).

It was hot – a late summer surge of 37 degrees (maybe more at some times of day) left the adults exhausted and the children still bouncing around, but it did make the workshop conditions difficult. Support from Liezel, the manageress at Clanwilliam Living Landscape Project was excellent, as always, and she produced filling breakfasts and lunches for the children each day. The librarians from Clanwilliam Library were unable to attend this time – and we really, really missed them, but they were involved with a simultaneous workshop for Grades 8-11 held at the library and facillitated by FunDza. (See separate report.)

We have plenty of ideas to develop and grow in the next ‘workshop season.’ There will be two weekend workshops in May and June, then a big season in the July holidays, when we will be pulling in facilitators to help with all aspects of the programme – which will be for all grades from 4 to 11. Separate outreach projects to younger children will take place during terms. All in all, CBN gave eight days of workshops in Clanwilliam in April, spanning Grades 4-11.

Thanks: This workshop was part of the Clanwilliam Dam Community Project (CDCP) in association with Clanwilliam Living Landscape Project, PGS Heritage and Clanwilliam Municipality, particularly their Library and their librarians who give CBN wonderful support. Sponsorship for the workshops comes from the Department of Water and Sanitation as part of its Social responsibility programme associated with the raising of the Clanwilliam Dam wall.