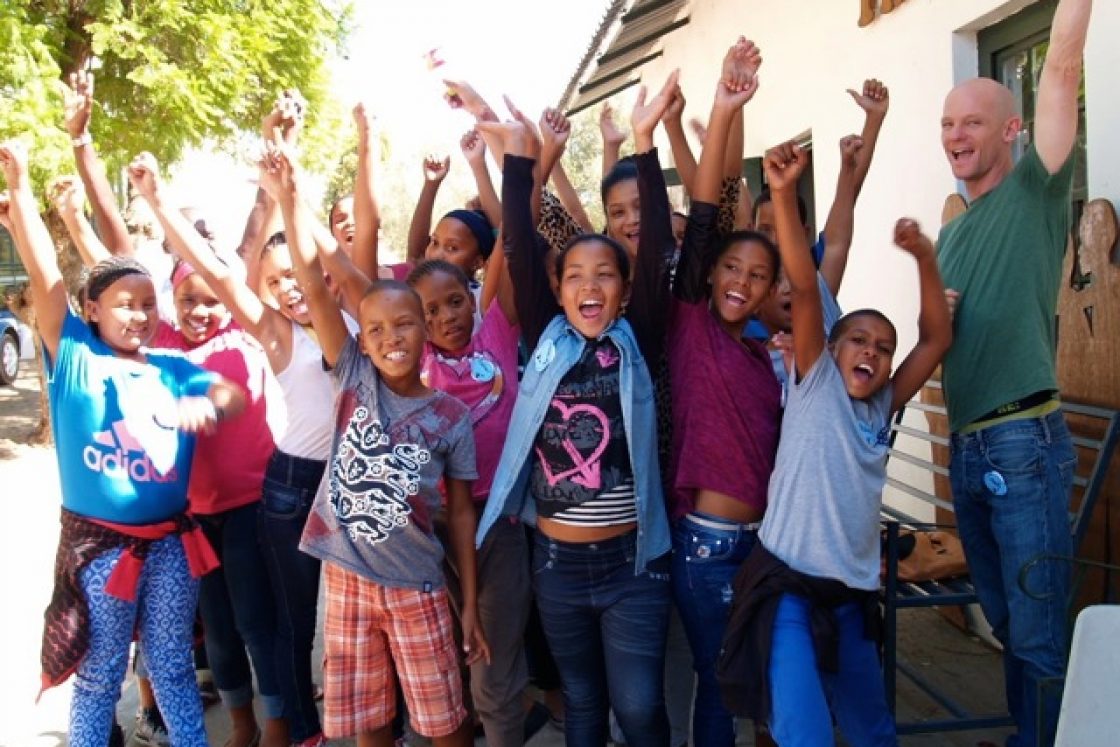 In Clanwilliam on 20 and 21 March CBN held the first workshop in the Clanwilliam Dam Community Project series. The theme was Water and Stories.

We began, as always, with something to eat and drink, then settled down to our theme of rivers, which included water as a necessity of life as well as a more detailed look at Clanwilliam’s rivers, particularly the Olifants River which is the focus of the Clanwilliam Dam Community Project (CDCP).

We then proceeded to introductions and ‘electric handshakes’ – always a popular ice-breaker – then settled in the hall to look at some of the previous workshops given by CBN in Clanwilliam and Red Hill and remind children what they can find on the website. We also introduced the theme for this year with some explanation about the fact that archaeologists will be working here for the next eight months. (Our resident archaeologist, Emily Hallinan, was struck down by a bug, so we saved her input for the second day.)

Story: A specially created story – The Water of Life – described how a young San hunter disobeyed his elders and finds himself lost, alone – and thirsty. A sudden storm saves his life in a time of drought.

The thunderstorm song was introduced with the children taking part in the story and the clapping and clicking the sounds of the raindrops.

Working with cards showing good and bad words associated with rain (gentle, stinging, hard, warm, soft etc.) to create a group-writing story using the flip chart. This was typed up and read back to the children at the beginning of Day Two.

Non-fiction and water – some books (and facts) were introduced including:

*Note: All of these books are library books and not easily available in SA. We will need to source suitable non-fiction for the toolboxes.

Discussion (and map) showing how a river begins, and where it goes.

Poetry and water: Water Words Composed by Ezra Benjamin for Cambridge University press Rainbow Readers. This was highly enjoyable – with the word ‘bubble’ in particular enjoying some rolling around!

The children then did individual writing using some of the words and ideas explored above.

As usual, when this activity was finished, each child went on to silent reading – this time from non-fiction books from Grade 4 Rainbow Reader Boxes Communication and People.

We finished up by remembering the clapping game the children enjoyed so much at the winter workshops, amid much hilarity and laughter on the lawn.

By five o’ clock, the workshop wound up with an apple for the walk home and promises to be back ready for action the next day.

Reinforcements arrived in the form of a recovered archaeologist (Emily) and our two musical and poetry stalwarts croc E Moses and Anele Mhlahlo who travelled up from Cape Town after work on Friday. Now we could build on the groundwork laid down on Day One. All the children came back.

We began by reading and discussing the group writing from the day before. The rules are that Lesley can edit and move the order of sentences around (and correct any obvious spelling mistakes) but no changes to text – with the exception of five words sneaked in as as a test. This time the words were not spotted, but passed as allowable anyway! To see the writing, open the document attached to the bottom of this page or follow this link.

Archaeology: Emily then led into the idea of the valley the children live in being inhabited for a million years (there was some incredulity about this point) and showed the children some prepared examples of stone age tools found around the dam – tools like those that will be part of the rescue archaeology ahead of the dam wall being raised. We started map work with the Olifants River Valley and the Cederberg Mountains.

We explored the question: How do archaeologists know what happened in the past? With reference to Janette’ Deacon’s book The Best Job in the World and other books form the Cambridge University Press Rainbow Reader’s box on Archaeology.

The Nature of Water is to Dance  (croc E moses 2011): To give the children a bit of a chance to move around, Anele and croc E led them in a sound and movement experiment. They spoke a bit about the different forms water can exist in; storms, ocean, waves, ice; and queried how the children might express these different forms with sounds and movements. Anele then accompanied the words with corresponding sounds on his violin while croc E and the children expressed the forms in dance. They moved with really amazing empathy to the music and were not self-conscious or giggly – although they clearly enjoyed themselves.

Group Work – water sounds and experiences: The children then split into two groups. One group worked with croc E and Anele in the guesthouse using visual and sound stimulants. croc had some images that he had made using water and oil-based paints; this technique creates fascinating patterns that look like aerial views of estuaries, but also like liquid under a microscope so while he and Anele played water sounds on the guitar and violin respectively, the children were encouraged to look at the images and listen to the sounds and write down their thoughts, words and poems, as inspired by these stimulants.

The other group worked with Rosemary and Emily in the hall on writing their own experiences of rain and rivers. Beginning with Rosemary & Emily telling personal stories about being in rain or hearing frogs ahead of a storm, or being caught on the mountains in rain and sheltering in a cave. The children were reluctant to tell their own stories, but they were more than happy to write them down and draw corresponding pictures. Thus the idea was reinforced that storytelling is a personal thing that becomes a community thing … and that modern electronic communications are another way of telling stories as well.

Stories: We continued the idea of different kinds of stories by telling the story of the raindrops that saved the San boy’s life in the story told on Day One; first they sank into the dust, but gradually collected into puddles and pools and started to run – always down – until they reached the river, and the dam.

Water and Paint: Over lunch, Emily and Rosemary laid out the paints and prepared long boards to paint the valley and the river – an enthusiastically undertaken project! We know there is still work to be done, because both groups put the dam wall at the wrong end of the lake, but that’s why we are here!

Anele played some water music to spur the artists along and we finished a bit later than expected with group photographs.

There never seems to be enough TIME! Our friends and facilitators give freely of this most valuable commodity, but we always expect more of ourselves. Workshops take every last ounce of energy we have, but it is always worth it.

We are working on ways to make it easier. The Toolboxes are ‘in development’ and will be invaluable when they are ready. (They will never be complete, as we will always be evolving them).

We are working on ways to make the children more comfortable with speaking in front of their peers. We know that they are all working in a second language (we work in English with interpreters always on hand, but they speak Afrikaans or isiXhosa at home.) The problem is more one standing out in front of the others. In smaller groups, the same children love reading aloud, but they become shy in front of too many people. The iPads may be a clue here.

We need a technical facilitator and recorder at each workshop to get the data projector working and keep everything else flowing. We are looking at training local facilitators both in Clanwilliam and Red Hill.

It would be wonderful too to have a scribe/recorder at each workshop who just takes notes, video’s and photographs, all labelled and organised.

We need to be able to buy a lot more books. Books that are used in the workshops should be available to the children afterwards in their library or classroom.

Workshops have an incredible energy. The children give their all, and we must too. The end result is definite improvement in attitudes to books and reading, more confidence, more relaxation and enjoyment – more reading.

Thanks: This workshop was part of the Clanwilliam Dam Community Project (CDCP) in association with Clanwilliam Living Landscape Project, PGS Heritage and Clanwilliam Municipality, particularly their Library and their librarians who give CBN wonderful support. Sponsorship for the workshops comes from the Department of Water and Sanitation as part of its Social responsibility programme associated with the raising of the Clanwilliam Dam wall.