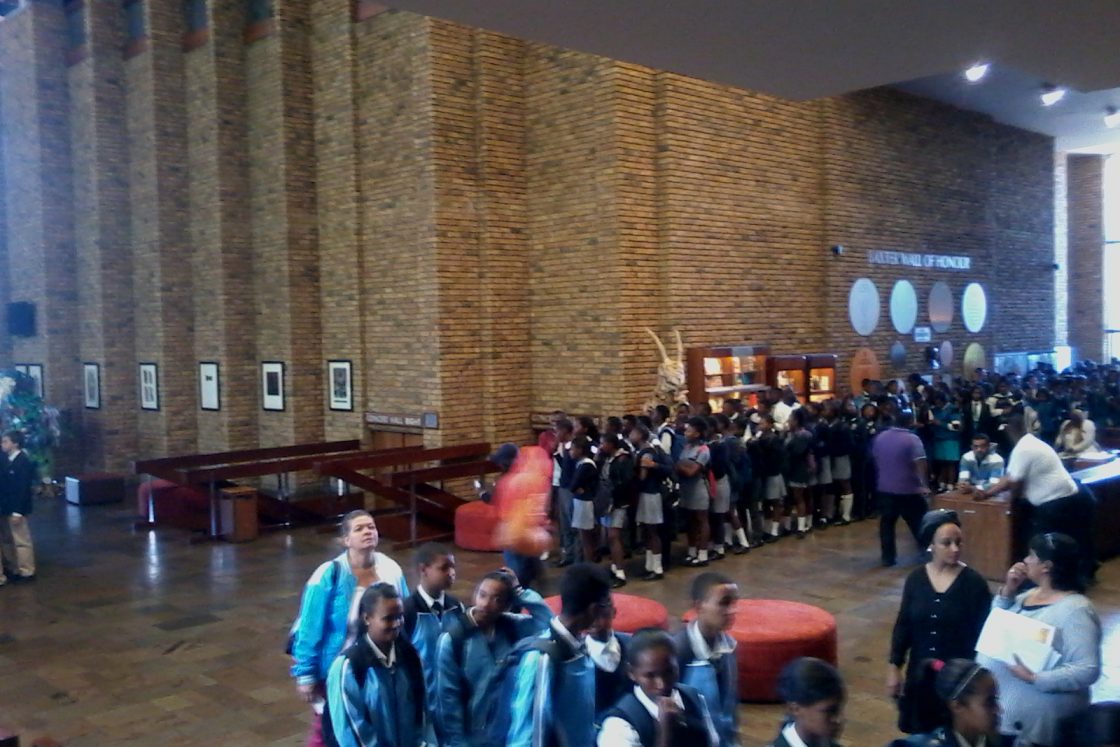 Not long after arranging to go to Warrior on Wheels courtesy of Assitej South Africa, Assitej called us again to offer us tickets to see Lion Boy at the Baxter theatre. Again they covered the cost of our trusty transporteers, Oceans Tours and the tickets so we were thrilled to take 9 children from Redhill to see this london production and on International Theatre for Youth and Children Day. Denzil Jehoma, of Oceans Tours, Buyiswa Ponti and croc E were all able to stay with the chidlren during the performance. Denzil said afterwards: ‘What an amazing experience today! Very, very good show indeed…..the kids loved it to bits….we had a jol! ….the children were very well behaved’. croc E’s report is also below.

This outing was a big affair for the children of Redhill.

Arriving inside the enormous Baxter Theatre had these children’s eye’s popping out, not just because of the scale of the building, but also because the multi-tiered foyer was completely full of students from all over the Cape peninsula. There we were merging with this crowd that was buzzing with anticipation. Very quickly came a request from the CBN children for the toilets!

After a moment of catching our breath we proceeded to the highest level of the Baxter from which to enter the theatre and take our seats. When we entered another shock wave hit most of the kids. Some of them had been to the Masque Theatre some weeks back, but this was a whole other scale of magical space. We had seats at the very edge of the third tier, almost looking right down over the stage.

Lethu said she felt nervous before the show started. That seemed like an understatement considering this was her first time to the theatre. The show started in the dark with an explosion of sound and light entrancing the whole audience. The phenomenal scale and standard of production kept everyone focused on the story of Charlie.

There was dance, circus acts, live music, comedy, mime and moments of epic stillness and quiet as the audience followed Charlie the on his quest to find his abducted parents in a world not far in time from ours.

Of course there were moments where the cast interacted with audience and this sparked uproarious and deafening applause from the full house including the CBN children.

The interval proved to be another needed breather with some light snacks and fresh air. The second half of the play led to a grand finale and showdown with the antagonists. Even some of the children who had been fidgeting in the first half were on the edge of their seats; especially for the simulated boxing match.

In the end it was clear that Charlie had triumphed even if some of the children’s understanding of English or hearing was compromised in such a setting.

The play left the CBN children in high spirits and with obvious smiles in their eyes. I also sensed that the children were relieved that it was the end overall of such a colossal outing. This required another trip to the toilets before the long ride home to Redhill. I decided again like the outing to the Masque Theatre to not push them on feedback and rather give each child a chance for the experience to seep into their young body, spirit and minds.