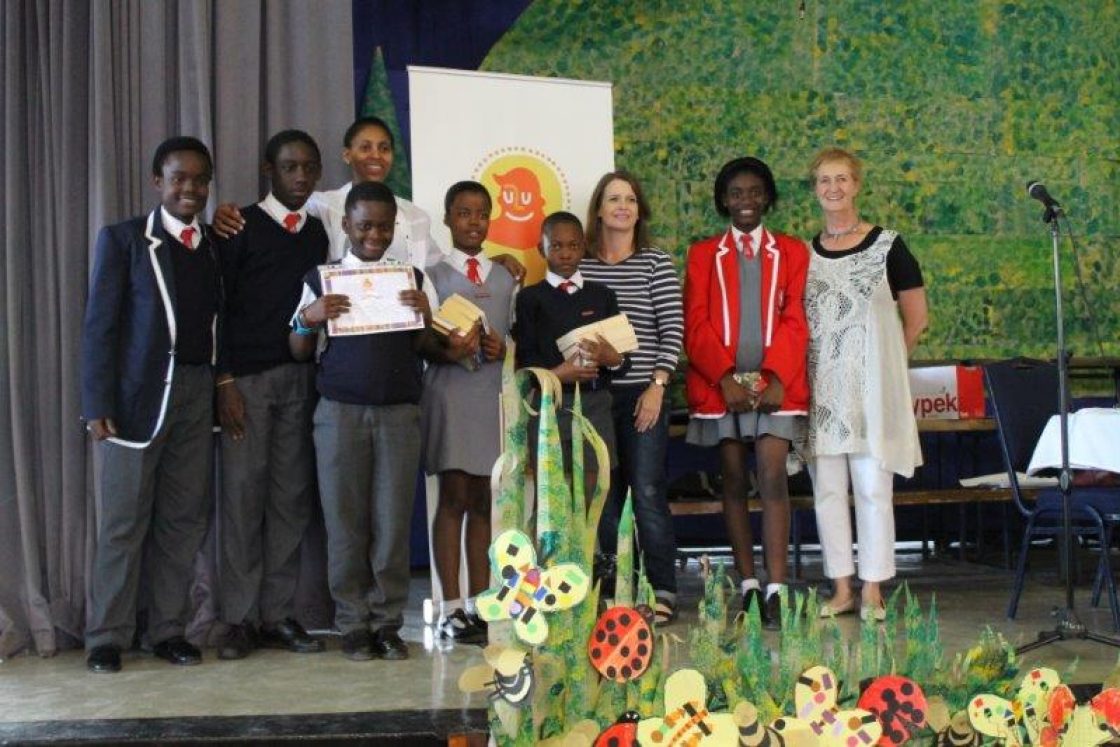 Today, 102 pupils from more than 12 schools in Johannesburg, took part in the Phendulani Literacy quiz. This was one of five such events around SA in which overall, about 50 schools will participate. The pupils had read 24 books in teams of 6, in preparation for the event. Books ranged from small picture books such as the short story The Gift of the Magi by beloved USA author, O Henry, to classics such as Don Quixote, to contemporary SA literature such as Team Trinity by Fiona Snyckers. African short stories by Nigerian author Ifeoma Onyefulu were also included and the British author Nicola Davies’ book The Lion who Stole my Arm.

The 24 books were divided up into four categories of questions: Life lessons, Courage, School and Family Life, and Tales and Fables. Before the quiz, pupils were asked to fill in evaluation forms to give feedback on the books. The top vote went to Team Trinity By Fiona Snyckers ( 20 votes), followed by The Unforgotten Coat by Frank Cotterell Boyce( 8 votes) and Diary of a Wimpy Kid (7 votes).

When Phendulani started 6 years ago, the average score was 30- 40 %, with the High scores being 60 %. This year, the average score was 72 % with the winning team scoring a grand 93 %. The team once again came from Yeoville Community School – a school designated by the GDE a few years ago as a school at risk for its low literacy and numeracy scores. The teachers present at the event bore testimony to the positive effect the quiz has had on reading in their schools. As the quiz has progressed over the years, Marj Brown, quizmistress and founder of the quiz, has increased the level of questioning from basic questions requiring one word answers , to questions that interrogate the reasons for actions, and consequences of actions. “This year I felt that some of my questions would be too challenging, yet in every category, at least one school managed to achieve full marks. The teachers helping me mark were so impressed by the in-depth answers received”.

A highlight for the pupils at today’s event was a visit by author Fiona Snyckers, author of Team Trinity. The children listened attentively as she spoke, and then plied her with questions about her life, characters, and the skills one required to become an author or journalist. Once again, the questions were posed in an articulate, considered way, impressing the adults present.

It is hoped that next year the quiz will spread to a number of schools who have container libraries that have been stocked by corporates. If the growth of literacy in the schools that have participated in the quiz thus far is anything to go by, it would be a wonderful way for sponsors to top up the container libraries each year – by stocking the 20-24 books on the annual Phendulani quiz reading list.