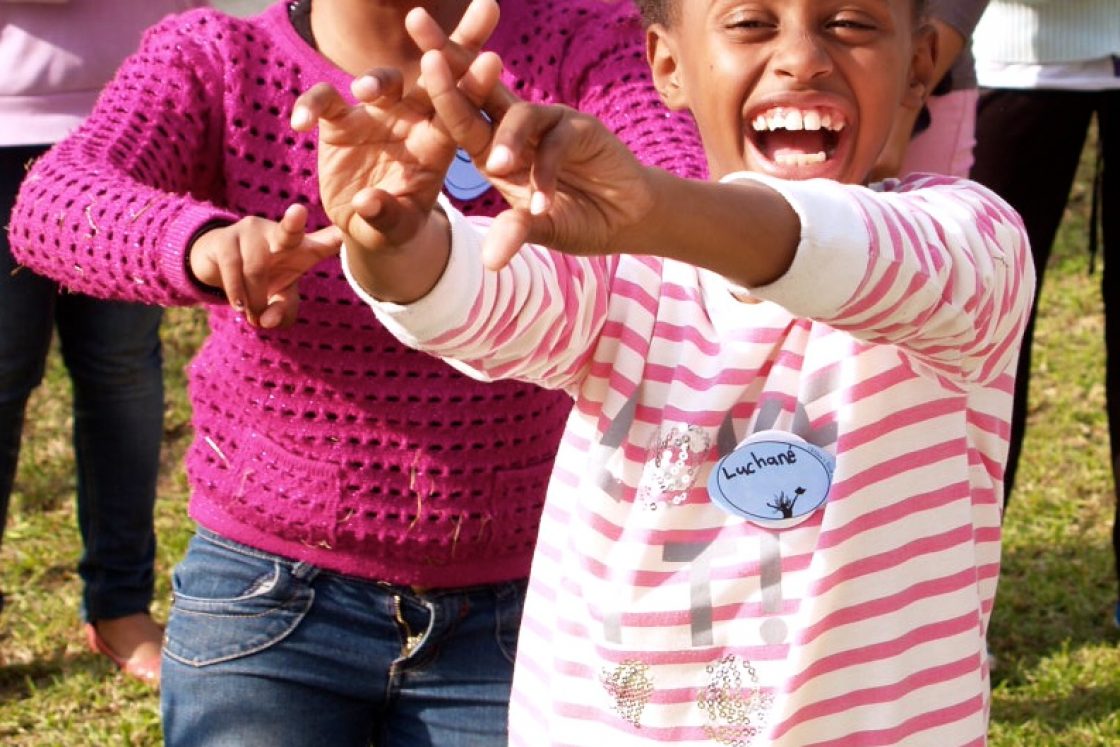 Twenty-five children from three schools in the Cederberg took part in a four-day workshop at Clanwilliam Living Landscape Project (CLLP) between 30 June and 3 July. It was incredible!

This workshop has been a long time in the dreaming. We wanted to try some new ideas, inspire the children with new concepts; stir things up a bit. We did.

There were three work groups circulating among a team of eight facilitators, ably backed up with tremendous support from the Clanwilliam library team who attended every day and joined enthusiastically in every activity with the children. A ratio of ten adults to twenty-five children gives really careful support to individual children and enables them to achieve successful, creative results.

The staff and catering team at CLLP did an excellent support job, providing breakfast and lunch for the children every day and invaluable assistance with setting up. Hugh Clarke, a Champion of CBN and ongoing supporter in many, many ways, kept us technically connected and sustained us in moments when electronic devices refused to play. Mary Cadogan, another Champion, worked on the iPad project and nurtured everyone who came within her orbit. Di Mohr kindly came to take pictures for us. Everyone on the team worked late into the evening, sharing stories, planning the next day, preparing the evening meal we shared every night. There was a lot of laughter from facilitators and children – all the time there was laughter.

There were three projects on the first three mornings – shadow puppets, song writing and creating books on iPads. The children circulated in their groups so that each child had a chance at each activity. In the afternoons, after a hot lunch, we worked with them on music, clapping games and creating music from the rock gongs. Between every activity we worked with books and stories and encouraged and motivated the participants towards exploring new worlds through reading.

Themes
We were concentrating on ideas of time, landscape and people in the Cederberg region, beginning with the geology and focusing particularly on aspects of San life, including the beautiful rock art found in the mountains we could see if we just lifted our eyes. One particular focus was making sound and music from rocks that ring when struck with another stones. These stones were brought from the Karoo a few weeks ago as part of a joint project with University of Cape Town and formed a central point for many of our activities.

Reading:
During the four days the group was exposed to books and stories from different cultures and times as well as stories from their own landscape – from geological time right up to the present. The message from all the facilitators was … read, read and then read some more. There were also life skills and motivation to just get on and DO things in life; to believe in yourself.

Song-writing
We were privileged to have musicians croc E Moses and Anele Mhlahlo working as a team to create songs with the children. There will be more on this in later articles, but the aim was to draw the words of the songs from the children, compose them as to music and then sing it together, with the aim of performing it for the whole group and an invited audience on the last day. Working with guitar, violin, drum and a whole lot of imagination, the project was completely successful. The songs were unusual, unique – all sorts of things – and none of us can get them out of our minds!

Shadow Puppets
Rosemary Bangham has become an integral part of all CBN activities and she excelled herself during this workshop. She was joined in the puppet project by friend and archaeologist Emily Hallinan who also shared her expertise on the San and matters archaeological. Rosemary and Emily created shadow puppets with the children that illustrated San-themed stories and performed them brilliantly for the audience of parents and other adults invited for the last afternoon.

I-pads
In the classroom, all children had an opportunity to work with iPads – two on loan from Digicape, one already purchased by CBN with funding from ‘Help the World to read’ in Sweden and two on loan from facilitators. They took pictures, recorded their own voices giving impressions and drew pictures to illustrate their work. Some of these appear already on this website under CHILDREN / Listen to us. Phumla Gqoboka and Mary Cadogan facilitated this part of the workshop, assisted by a rotation of librarians.

Performance
We invited the riel dancers from Elizabethfontein Primary School over the Pakhuis Pass to come and join us for the final performance and books and stories. Adults form the community and parents of children attending were invited to come too.

We began with the shadow puppet performance – to wild acclaim from the audience – and then proceeded to the songs. Nobody could quite believe that these children had, in the space of three days, written and were now performing such lovely songs.

The dancers performed on the lawn, dancing stories that are well known to this local audience. Riel dance is particularly appropriate for CBN because the dances all tell stories and are part of a long tradition of story telling that goes back many centuries and are strongly influenced by San and Khoi culture.

The final performance was by all the children clapping and drumming on the large rock gongs while the audience stood round and marveled. All the children then performed the rainstorm music, clicking, clapping and stamping the thunder on the long-suffering trestle tabletops. They had a ball.

Farewell
After four days of intense working, creating, imagining, inspiring and sharing it was very hard to part. As we stood on the lawn, mingling with the invited guests, each child came and spontaneously hugged every one of the facilitators in turn. That was something we will never, never forget.

Conclusion
There was much for CBN to learn form the experience of this workshop, and much to build on for the future. The inspiration for us was the children. They started off wary and perhaps a little doubtful. But over the first day they began to give back – far more than we could give them. It was a magical experience for us all.

Thank you: To Clanwilliam Living Landscape Project with whom this was a joint venture, to Digicape for the loan of the iPads and to an anonymous, but much appreciated donor in Europe who made the workshop possible. Thank you!