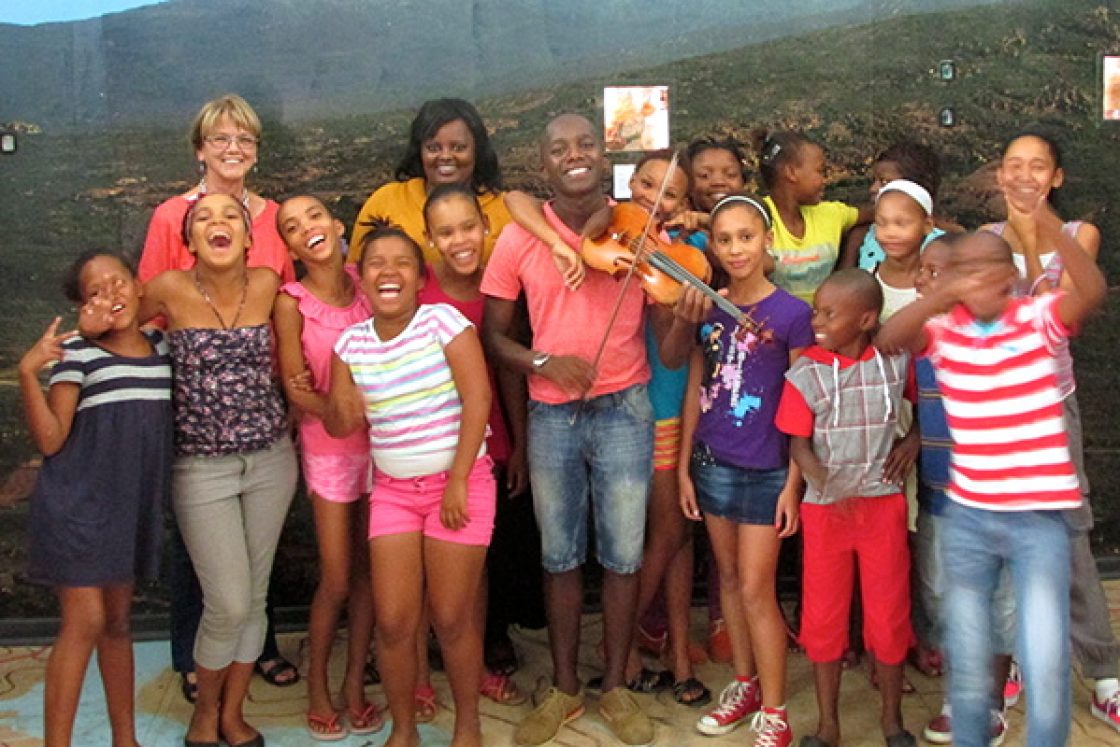 On the last day of the school autumn break, CBN held a workshop at Clanwilliam Living Landscape Project. We were focusing on the art of listening – both to words and to music. Anele Mhlahlo brought his violin to explain the finer points.

We worked with recorded music first of all pointing out that not everybody liked the same thing (although many of our target age group mention Justin Bieber fondly when given the chance).

We began – as always – with a featured book. This time it was Paul Gallico’s classic Snow Goose. The book was published in 1934, so is out of copyright and can be downloaded from the Internet (link below). The beginning is very descriptive, so we summarized the first two pages in order to get to the heart of the story. We also provided pictures of snow geese to help with imagining the story.

The children listened as the lonely hero of the story, Philip Rhayader, meets Frith, a child who brings him an injured snow goose who has been shot by hunters. It is a beautiful and very moving story and real listening is required. One of the main reasons for choosing this book was the existence of some hauntingly beautiful music of the same name recorded by a group called Camel in the 1980s.

They reacted with great amusement to the contrasts, but really (really) listened to the different sounds. We followed this with listening again to words and following the ideas they led to. The music of the Snow Goose elicited words like ‘feather’ and ‘strength’, for example.

Anele then taught them how to listen to his violin. Giggling is the default setting for this age group, but when he asked them to close their eyes, they were able to concentrate. With their eyes open again, he showed them how he could change the way they felt about the same music by changing his expression while he played. If their eyes were closed, they were really listening, really concentrating.

Our next task was to make patterns with the music. Each child divided a large piece of paper into four and drew four patterns and four pictures to illustrate happy, sad, angry and dreamy music. They also made movements to suit the sounds – particularly the flying feel of the Snow goose music. Some of them noticed that the patterns resembled hospital graphs measuring heart beats.

After another short recital by Anele, they heard more of the story as far as the moment when the Snow Goose leaves on her way back to her home. The children then wrote some impressions of the story. Some of them are published under CHILDREN / Children’s Writing on this website. Here is one.

I listened to the story and then the music and I learned from it that you always find your way. It was about a bird that was flying for thousands and thousands of miles. People don’t know how special stories are. Stories are the most interesting thing in my life. My grandfather is busy with a book about Wuppertal and I am also busy with one. Stories are special. They can help you with many, many things.

By this stage, we were running out of time, so everybody had juice and a cupcake and it was agreed that those who wanted to do some writing would stay and the rest would go home.