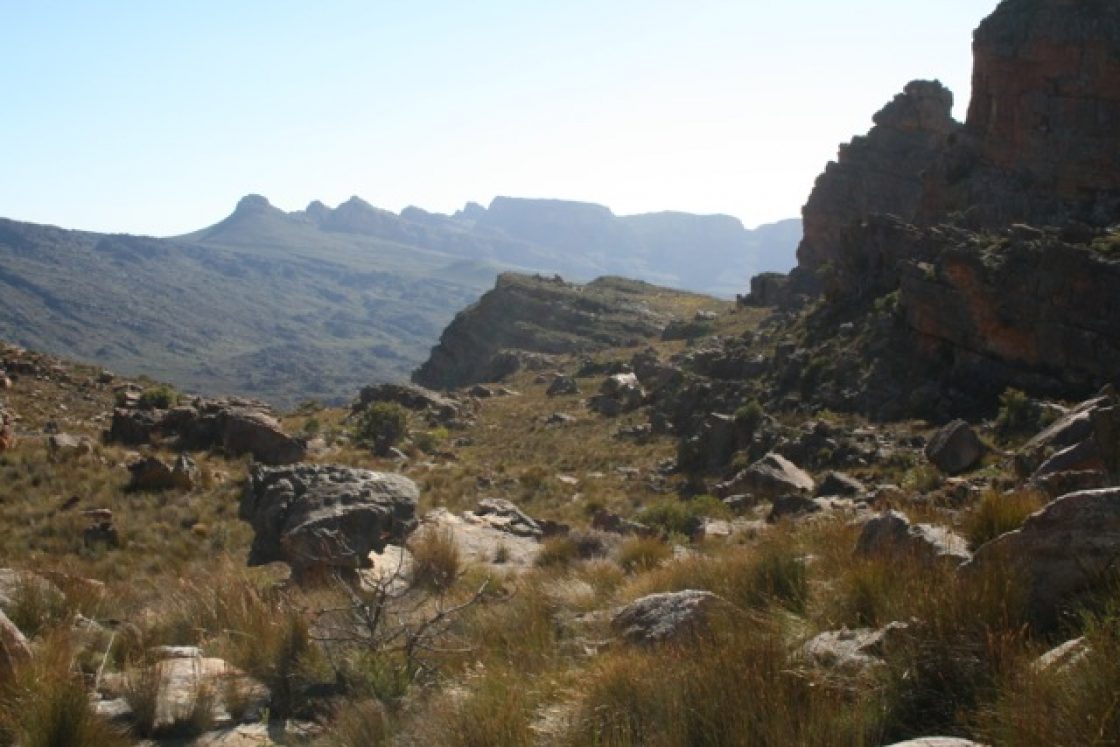 Three hours out of Cape Town the road north climbs a steep pass and emerges into a dramatic landscape of mountain, river, crag and cliff. Some of the most beautiful and evocative landscape of southern Africa is revealed.

This was a place where the earliest people lived, hunted, dreamed … and told their stories. We know this from the record of rock art – several thousand sites hidden in rock shelters or exposed on flat stones along the paths they walked.

The Cederberg is still a place rich in story. Children’s Book Network, in association with Clanwilliam Living Landscape Project, Clanwilliam Libraries and others are planning to bring those stories alive to a new generation of children and young people and to collect the stories of the more recent past and of the children who live here now.

Stories are everywhere here, but they are being lost, devalued, forgotten. In a two-year project we hope to change that situation. We want to involve the young people of the region in a new appreciation of their own past and that of the people who have lived here over thousands of years. In the process we hope to make books, reading, writing and story important – and fun.

We will be visiting farm schools and small libraries in very remote villages in the mountains as well as reaching children in the rural towns of Clanwilliam and surrounds. This is an area where many agricultural workers live far from town and their children attend farm schools. Communities are poor. There are social problems relating to poverty and joblessness. This region remains deeply affected by historical issues and split by both past politics and poverty. There is much to be done if children are to be given an opportunity for change and education, especially in reading and heritage issues are key to this change. The estimated number of children reached by the two-year project – 4000 children between the ages of 6 and 12 years old.

Will be research from everything written about this area and from texts from outside the region. The main focus will be to develop an interest in heritage, history and landscape through literature from South Africa and abroad. Short extracts will be pre-selected and provided either on reading tablets or as printed copies and the books they come from will be donated to the libraries and schools for those who are interested in reading more later. In a translation project in association with Rotary Skelleftea in northern Sweden, we will also be translating short texts and providing them through our website.

We are busy establishing a local network of concerned principals, teachers, librarians, parents and community members. This will continue throughout April and May and we hope to have a stakeholders meeting at the end of that process to workshop methods and resources.
The Methods: Workshops and Website

Children’s Book Network (CBN) offers workshops to children from educationally less privileged areas, areas where there is little in addition to basic school attendance and few resources to excite an interest in reading or writing stories. We bring with us storytellers, authors, drummers, photographers, artists and theatre people. We make a lot of noise … and then have the quietest moments of all, moments when children are really listening, listening with their hearts as well as their minds, absorbing story.

We work with books, stories told aloud, reading tablets and a range of texts specially selected for the theme – in this case Home and My Landscape. Working in groups of 15 to 20 children we allow time for mapping activities, dramatization and discussion, photojournalism, thinking and listening. At the end of the workshop each child will have produced their own book as well as participating in a bigger writing project that will initially be published on CBN website.

Our website is a highly interactive means of communication where the texts we use in our workshops as well as the resulting writing produced by the children are published – and some translated into local languages.

This is also where children, teachers, parents and librarians can see the artwork and photographs that are produced and read the work their children have written.

More than that, it is a virtual meeting place for children from other cultures, other worlds. We are already building e-bridges between children in northern Sweden and southern Africa so that children can communicate, compare – and possibly realize that they have more in common than they have differences.

Was founded in 2012 by three South African writers – Gcina Mhlophe, Lesley Beake and Sindiwe Magona. It began as a result of a growing need to be active in the cause of children’s reading and appreciation of story.

During 2012 we laid down the guidelines for the way we wanted to work and gave four workshops – two in Red Hill informal settlement near Simon’s Town, one in Kayamundi township in Stellenbosch and one – with the choir of the University of Cape Town – in Clanwilliam at the Living Landscape project.

We have been warmly supported in our efforts by:

• A loyal team of volunteers. We thank them all.

This is a Rotary linked project and finances are handled through Rotary Cape of Good Hope.

• Pre-planning, research and development.
• Making contact with schools and libraries in Clanwilliam and other centres.
• Selecting texts and developing materials for workshops.
• Planning workshops with Clanwilliam stakeholders.

Pilot workshop with schools in Clanwilliam and at a mountain farm school or library.

September
Heritage Day linked events and workshop with the themes of Home, Heritage and Landscape. This could include the launch of the Time Walk in Park Street, Clanwilliam in association with UCT Department of Archaeology. Clanwilliam Municipality and others.