Kubi the star – a summary of a slightly longer book.

This story was written for children in Ghana, but it could be the story of a child anywhere who suddenly became … a star.

Kubi was not good at schoolwork. His reading was bad, and his sums were worse.
‘What am I going to DO with you?’ Miss Asirifi asked, shaking her head.
‘I don’t know,’ said Kubi.

Kubi’s mother was worried about him, although he was still only six. ‘What are you going to do when you grow up?
‘I don’t know,’ said Kubi.

Kubi’s grandfather worried about him too. ‘How is that son of yours going to look after you when you are old?’ he asked.
‘I don’t know,’ said Kubi’s mother.

Her friends worried as well.
‘How is he going to find a good woman and marry her and have grandchildren for you?’ they asked.
Kubi’s mother shook her head. ‘I don’t know,’ she said. ‘I just don’t know.’

A star! Kubi’s mother could not believe it. Her son Kubi, who was bad at everything, was going to be a star in a play! This was really good news!

Kubi’s mother liked going to see films and she liked watching films on TV. She knew about films and film stars. She read about them in magazines. She cut out pictures of film stars from the newspapers. Stars were famous! Stars were rich!

Kubi’s mother came back from her daydream. Kubi was waiting for his lunch.

Lunch! Now that Kubi was a star, he must have good food to eat! Kubi’s mother opened a tin of meat she had been keeping for Christmas. Was that all right, son,’ she asked when he had finished eating. It was. Usually Kubi only had bread and jam for lunch. Sometimes only bread.

From that day, life got better for Kubi. He ate better – meat and vegetables as well as chocolate and fruit. He slept in the afternoon. When he got bored with sleeping, he read some of the books in his homework bag. After he finished all those books, he asked Miss Asirifi for other books and read those.

Meanwhile, Kubi’s Mom was busy selling tickets for the school play. She made everyone buy them – until there were hardly any tickets left for the parents of the other children. When the day of the school play came, there was not an empty seat in the hall.

The play started. It was a Christmas play. Some angels came onto the stage and sang. Kubi wasn’t one of them.

Then Mary and Joseph came on. Kubi’s mother sat up. But when she looked closely, Joseph was another boy.

Then the big angel came on the stage, but he wasn’t Kubi either. Kubi’s mother’s friends and family began to look at her strangely.

There were shepherds and king.
There were children dressed as lambs and donkeys.
There was a hotel keeper and his wife.
None of them was Kubi.

Her friends and family began to whisper to each other.
‘Where’s this big star we have heard so much about?

At last Kubi came onto the stage.

He looked at his mother. He smiled. Kubi’s mother put her hands over her eyes. She didn’t want to look.

But all her friends and family looked while Kubi played his part on the stage.

Very slowly, he moved from one side of the stage to the other. He didn’t look at his mother now. He was too busy being a star.

The kings and shepherds followed Kubi the star across the stage and came to the place where Mary and Joseph were.

Kubi’s mother looked up then.

She took her hands from in front of her eyes. Suddenly she smiled. There was her son standing proudly on the stage. The kings and shepherds were following him. Mary and Joseph were watching him. He was a star.

He was HER star.

The book was published first by Sunbird Books in 2000 and then by Maskew Miller in 2001. It was written by Lesley Beake with brilliant illustrations by Diek Grobler. 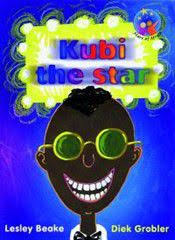